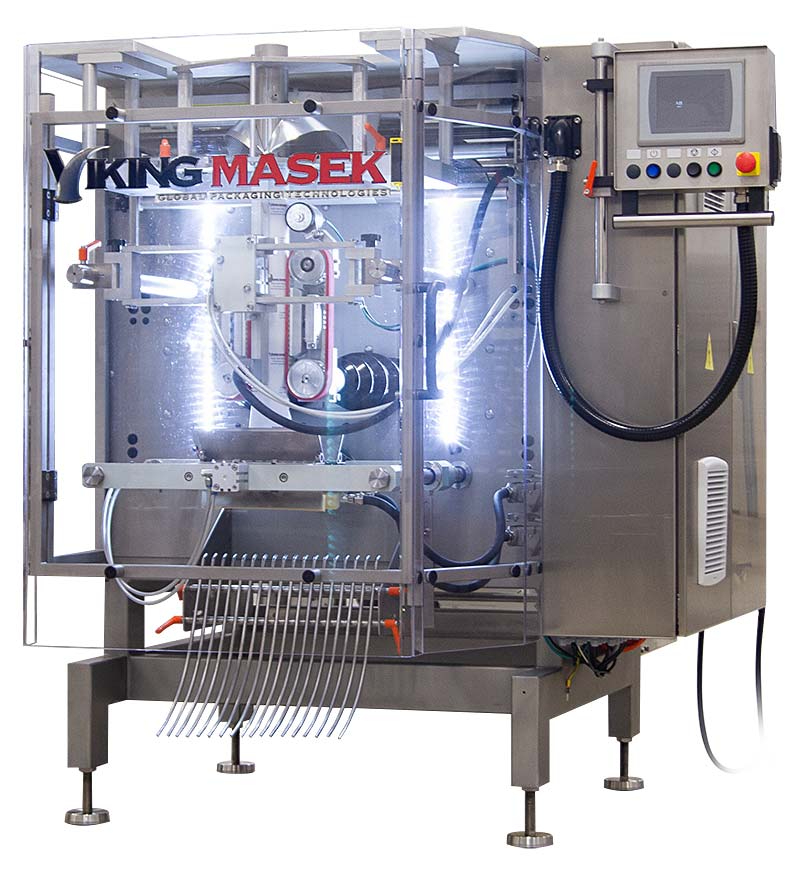 Whether you're new to packaging machinery or already have multiple systems, chances are you're curious as to how they work. In this article, we are walking through how a vertical form fill seal machine turns a roll of packaging film into a shelf-ready finished bag.

Simplified, vertical packing machines start with a large roll of film, form it into a bag shape, fill the bag with product, and seal it, all in a vertical fashion, at speeds of up to 300 bags per minute. But there's a lot more to it than that. 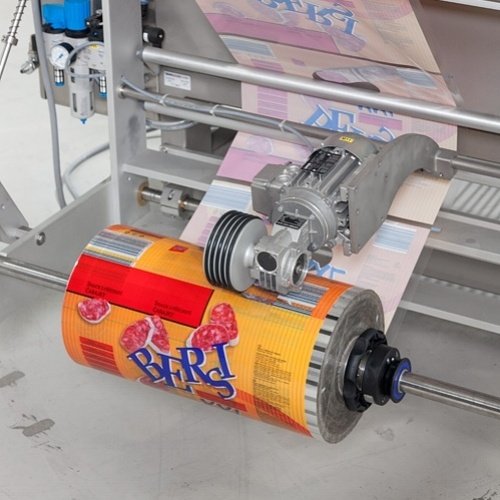 Vertical packaging machines use a single sheet of film material rolled around a core, usually referred to as rollstock. The continuous length of packaging material is referred to as the film web. This material can vary from polyethylene, cellophane laminates, foil laminates and paper laminates. The roll of film is placed on a spindle assembly at the rear of the machine.

When the VFFS packaging machine is operating, the film is usually pulled off the roll by film transport belts, which are positioned to the side of the forming tube which is located at the front of the machine. This method of transport is the most widely used. On some models, the sealing jaws themselves grip the film and draw it downward, transporting it through the packaging machine without the use of belts.

An optional motor-driven surface unwind wheel (power unwind) may be installed to drive the film roll as an assist to the driving of the two film transport belts. This option improves the unwinding process, especially when the film rolls are heavy. 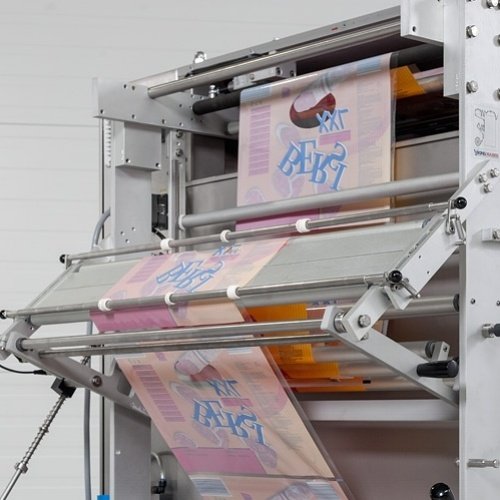 During unwinding, the film is unwound from the roll and passes over a dancer arm which is a weighted pivot arm located at the rear of the VFFS packaging machine. The arm incorporates a series of rollers. As the film transports, the arm moves up and down to keep the film under tension. This ensures that the film will not wander from side to side as it is moving.

After the dancer, the film then travels through the printing unit, if one is installed. Printers may be thermal or ink-jet type. The printer places desired dates/codes on the film, or may be used to place registration marks, graphics, or logos on the film. 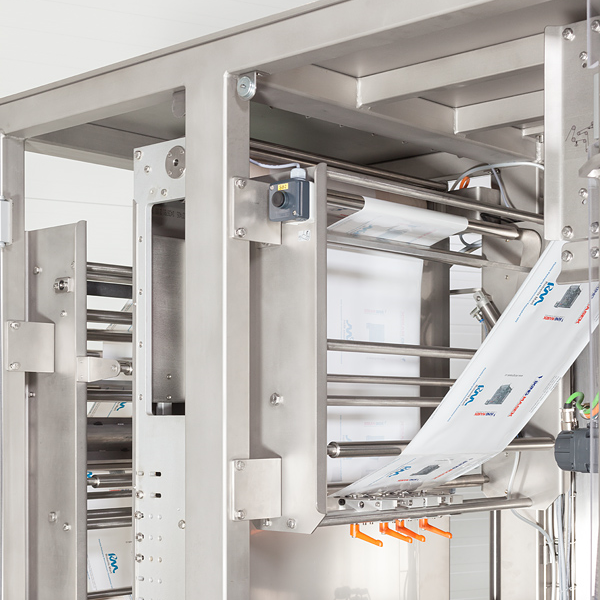 Next, the film travels past film tracking sensors that detect the position of the film as it's traveling through the packaging machine. If the sensors detect that the edge of the film shifts out of normal position, a signal is generated to move an actuator. This causes the entire film carriage to shift to one side or the other as needed to bring the edge of the film back to the correct position. 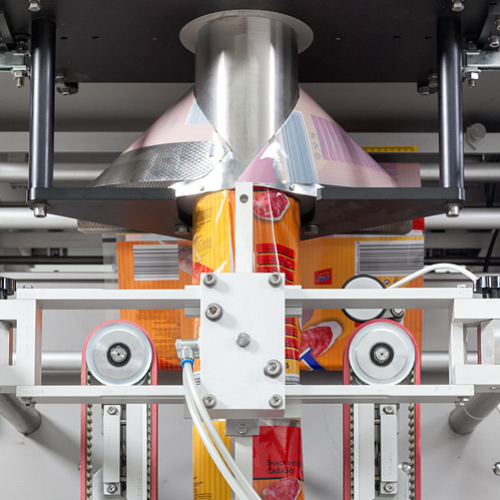 From here, the film enters a forming tube assembly. As it crests the shoulder (collar) on the forming tube, it is folded around the tube so that the end result is a length of film with the two outer edges of the film overlapping each other. This is the beginning of the bag forming process.

A rotary encoder is placed near the shoulder (collar) of the forming tube. The moving film in contact with the encoder wheel drives it. A pulse is generated for every length of movement, and this is transferred to the PLC (programmable logic controller). The bag length setting is set on the HMI (human machine interface) screen as a number and once this setting is reached the film transport stops (On intermittent motion machines only. Continuous motion machines do not stop.)

The film is drawn down by two gear motors which drive the friction pull-down belts located on either side of the forming tube. Pull down belts that utilize vacuum suction to grip the packaging film can be substituted for friction belts if desired. Friction belts are often recommended for dusty products as they experience less wear. 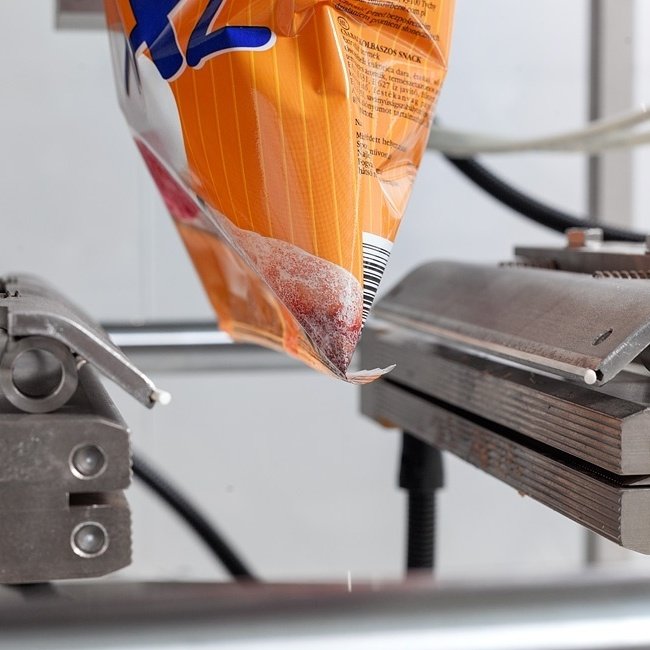 Now the film will briefly pause (on intermittent motion packaging machines) so the formed bag can receive its vertical seal. The vertical seal bar, which is hot, moves forward and makes contact with the vertical overlap on the film, bonding the layers of film together.

On continuous motion VFFS packaging equipment, the vertical sealing mechanism remains in contact with the film continuously so the film does not need to stop to receive its vertical seam.

Next, a set of heated horizontal sealing jaws come together to make the top seal of one bag and the bottom seal of the next bag. For intermittent VFFS packaging machines, the film comes to a stop to receive its horizontal seal from jaws that move in an open-close motion. For continuous motion packaging machines, the jaws themselves move in up-down and open-close motions to seal the film as it is moving. Some continuous motion machines even have two sets of sealing jaws for added speed.

An option for a 'cold sealing' system is ultrasonics, often used in industries with heat-sensitive or messy products. Ultrasonic sealing uses vibrations to induce friction at a molecular level that generates heat only in the area between film layers.

While the sealing jaws are closed, the product that is being packaged is dropped down the middle of the hollow forming tube and filled into the bag. A filling apparatus like a multi-head scale or auger filler is responsible for the correct measurement and release of discrete quantities of product to be dropped into each bag. These fillers are not a standard part of a VFFS packaging machine and must be purchased in addition to the machine itself. Most businesses integrate a filler with their packaging machine. 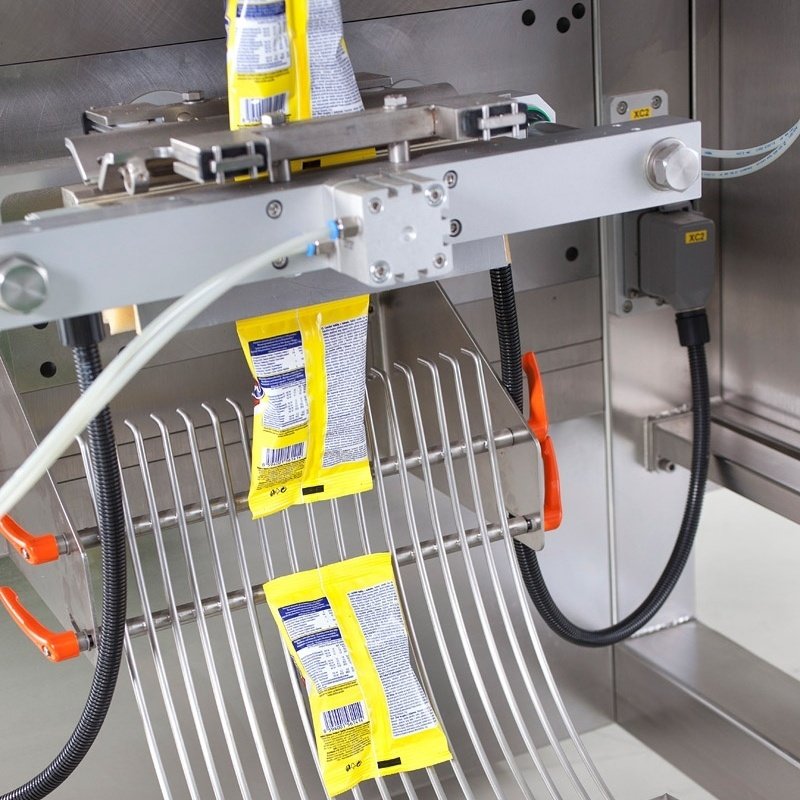 After the product has been released into the bag, a sharp knife within the heat seal jaws moves forward and cuts the bag. The jaw opens and the packaged bag drops. This is the end of one cycle on a vertical packing machine. Depending upon the machine and bag type, VFFS equipment can complete between 30 and 300 of these cycles per minute.

The finished bag can be discharged into a receptacle or onto a conveyor and transported to downline equipment like check weighers, x-ray machines, case packing, or carton packing equipment.

Shopping for a new vertical form fill seal packaging machine doesn't have to be stressful. Download our free guide for 5 questions to ask packing machine manufacturers. 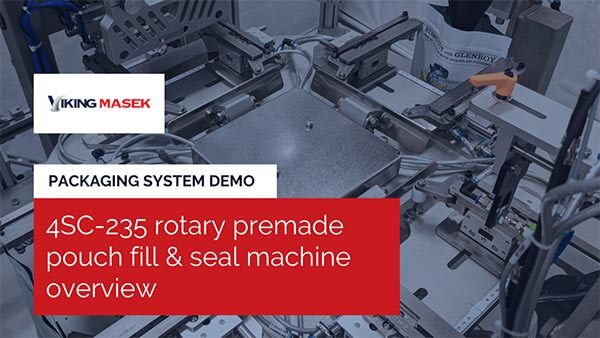 Meet the 4SC-235: Our most compact, user-friendly pouch packing machine yet