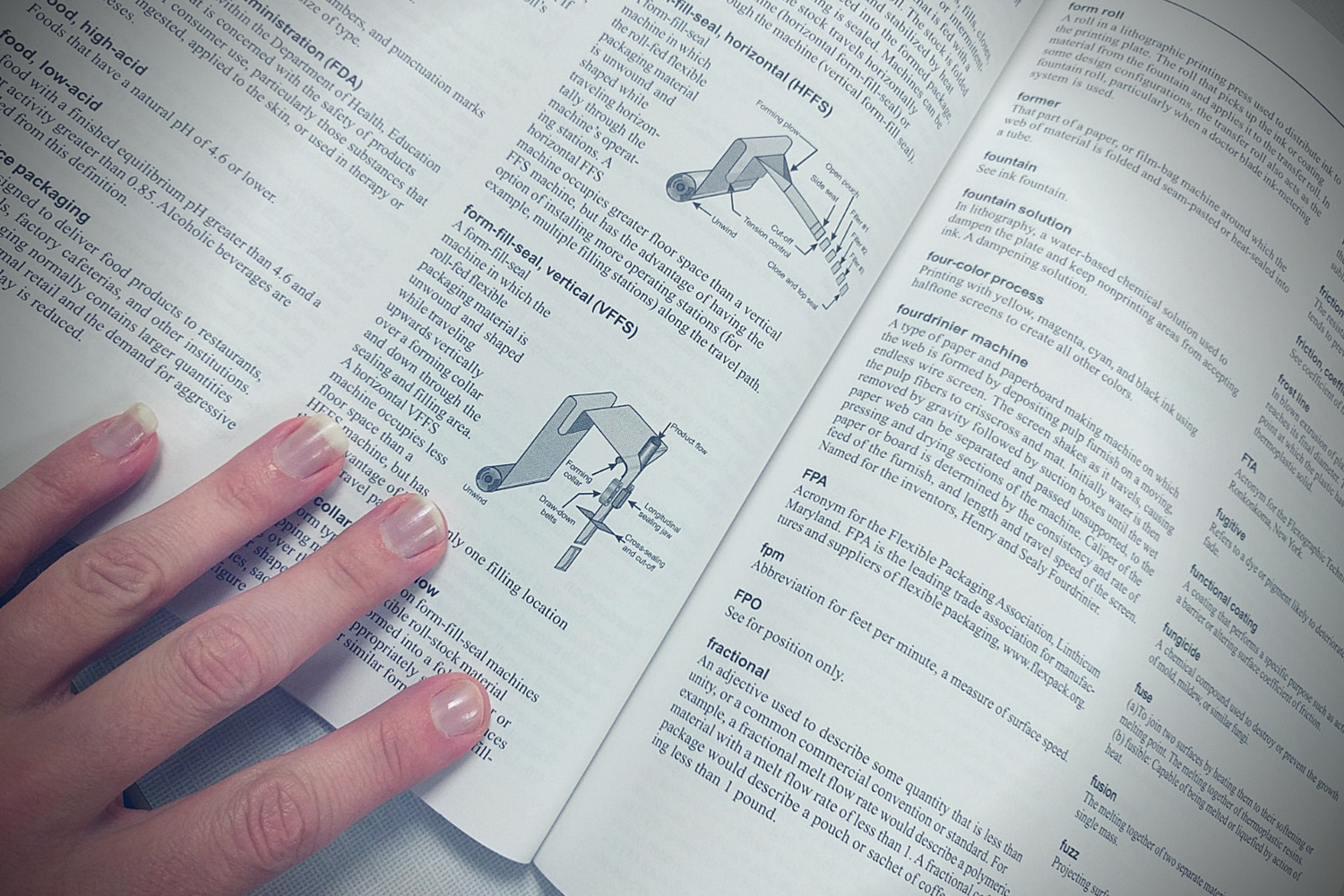 If you're new to flexible packaging automation, it can sometimes feel like learning another language.

What's a forming tube? What do servo drives do? What is modified atmosphere packaging?

We're here to help. Check out our list of commonly used flexible packaging machine terms below. You'll be speaking like an industry insider in no time.

Usually consisting of two components that gently squeeze the bag after filling but prior to receiving its final seal, bag deflators remove excess air from inside the bag.

Changeover is the process by which a packaging machine is adjusted to accommodate different bags or products. Because changeover means the machine is not producing, it should be minimized. Depending upon the machine, changeover can take from minutes to hours.

On continuous motion VFFS machines, the film is transported continuously and does not stop. This machine type offers higher output but usually requires a higher investment than a standard Intermittent Motion machine.

The Controls System governs the starting, stopping, direction of motion, acceleration, speed, and function of the machine. Allen Bradley and Siemens are the most popular brands of controls in the United States.

On VFFS machines, the cutting knife is in between the sealing jaws and moves forward once per cycle to cut the bag above its top seam. This releases the finished bag from the machine.

Mounted on torsion springs and located at the back of a VFFS machine, the dancer arm moves from front to back to keep the web of film under constant, even tension.

Fill and seal machines are loaded with premade pouches which are then filled with product and sealed shut. Also known as premade pouch machines or automatic pouch filling and sealing machines.

The film web refers to a continuous length of packaging film. This material is unwound from a roll (see Rollstock) and fed through a form fill seal packaging machine.

Usually fabricated from metal materials, the forming tube assembly is responsible for forming flat rollstock film into a bag shape. The curved forming shoulder is connected to a hollow forming tube. The flat web of film is pulled over the forming shoulder, which brings the edges of the film together to form a tube shape. After the vertical and bottom seal is created on the bag, product drops down the hollow interior of the forming tube and lands inside the bag.

The size and shape of the forming tube assembly is dictated by the finished bag dimensions and bag style required. Each size and style of bag requires a different assembly.

Sealing jaws use heat, pressure, and time to bond the sealant layers of packaging material together to create a package seal. Usually in pairs, these hot bars come together over the sealing area of a package to create a seam.

Similar to a computer monitor, the Human Machine Interface (HMI) is the primary operator station through which a human controls the packaging machine. Often a flat, 10 – 12 inch touch screen panel, this interface provides feedback, error reporting, status updates, and other information.

The HMI is usually located at the front of the packaging machine and can be attached directly to the equipment, located at the end of a movable arm, or on its own stand or pedestal next to the machine.

Considered standard in the flexible packaging industry, intermittent packaging machines must stop once per cycle to create the bag’s vertical seam. Intermittent machines generally cannot meet the high speeds of continuous models but are more affordable.

An IP Rating, usually composed of a 2-digit number, represents how protected an enclosure is against the ingress of solid objects and liquids. The first digit represents the level of protection against ingress of solids and the second digit represents the level of protection from liquid ingress. The recommended IP Rating for your packaging machine enclosures depends upon your product, plant environment, and cleaning protocols.

Any type of packaging material or process that seeks to modify, create, or maintain a certain atmosphere inside of a package. MAP is usually used to reduce the onset of oxidation, thereby extending the shelf life of a product.

Premade pouches are bags that are preformed into their end shape. They arrive at the production facility premade. These pouches are loaded into a fill and seal machine for further processing.

A machine component that gently shakes a filled bag to encourage the product to settle toward the bottom of the bag.

Pull belts, or film transport belts, are small conveying mechanisms that transport the web of film through the packaging machine. There are two main types: Friction and vacuum belts. Friction belts use friction between the film and the belt to move the film web. Vacuum belts use vacuum suction to suck the film against the belts. Vacuum belts, while more expensive, are often the preferred option because of better performance and longevity, especially if the product is dusty or messy, which can cause issues with friction belts. Friction belts can last weeks, while vacuum belts can last years.

Registered film has markings that can be detected by a Registration Photo-Eye on the packaging machine. These markings, when detected by the photo-eye, keep the film positioned correctly so the film will be cut in the appropriate spot.

As an alternative to heat seal bars (which are always hot), ultrasonic sealing only generates heat inside of the sealing layer of the film and only for a matter of milliseconds. This is done by way of converting vibrations at a molecular level to friction heat. The parts of the ultrasonic sealing component that come in contact with the package remain cold for the entire sealing process.

A vertical form fill seal (VFFS) machine uses rollstock film which is unwound and shaped while traveling upwards vertically over a forming collar and down the filling and sealing area. In short, VFFS machines form bags, fill them with product, and seal them closed.

Washdown construction means the packaging machine will be able to withstand harsher cleaning procedures. This design may include angled frames, silicone seals, covers for exposed moving parts, drip pans, and electrical/pneumatic enclosures IP rated for your facility and cleaning specifications.

Make the right packaging automation decision for your business

Learn everything you need to know to make the best packaging automation decision for your unique business needs. Download our free first-time buyer's guide:

How to properly vet a packaging machine manufacturer

5 questions to answer before requesting a packing machine quotation